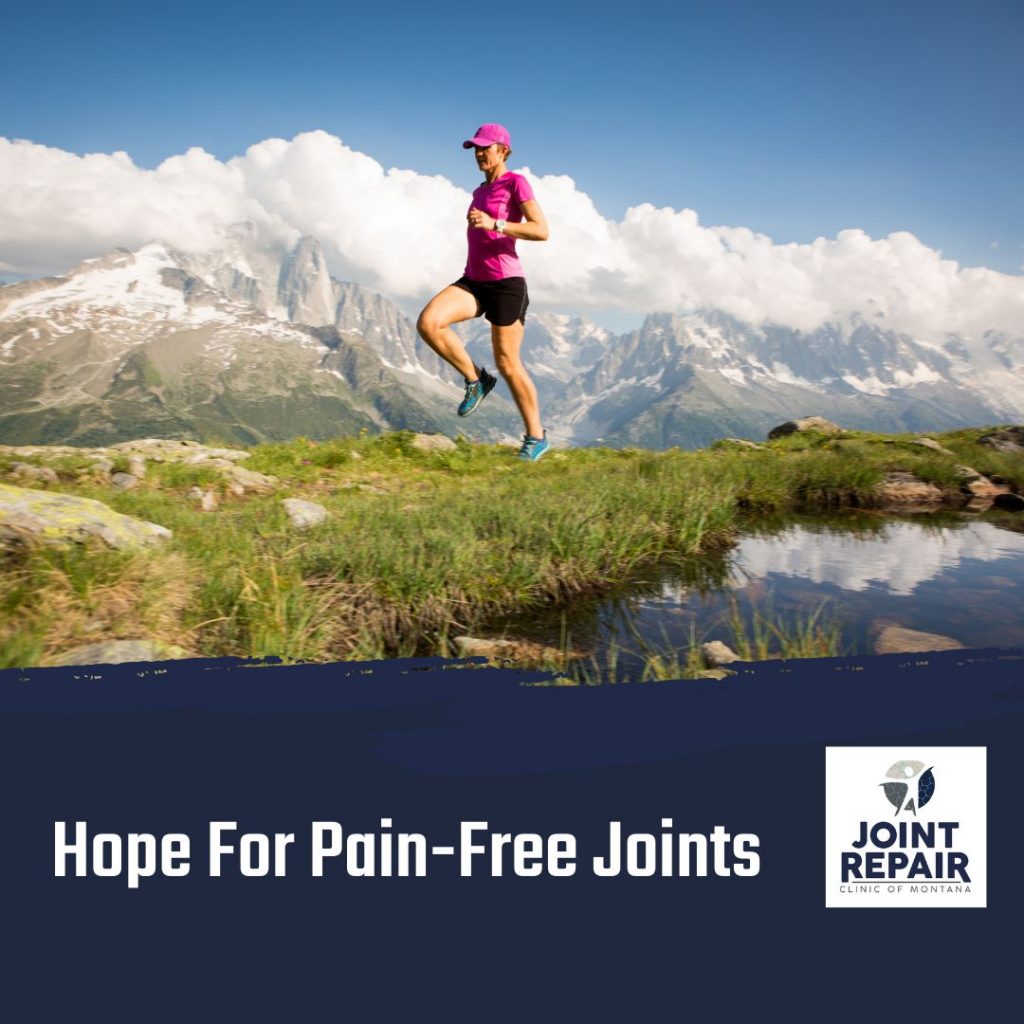 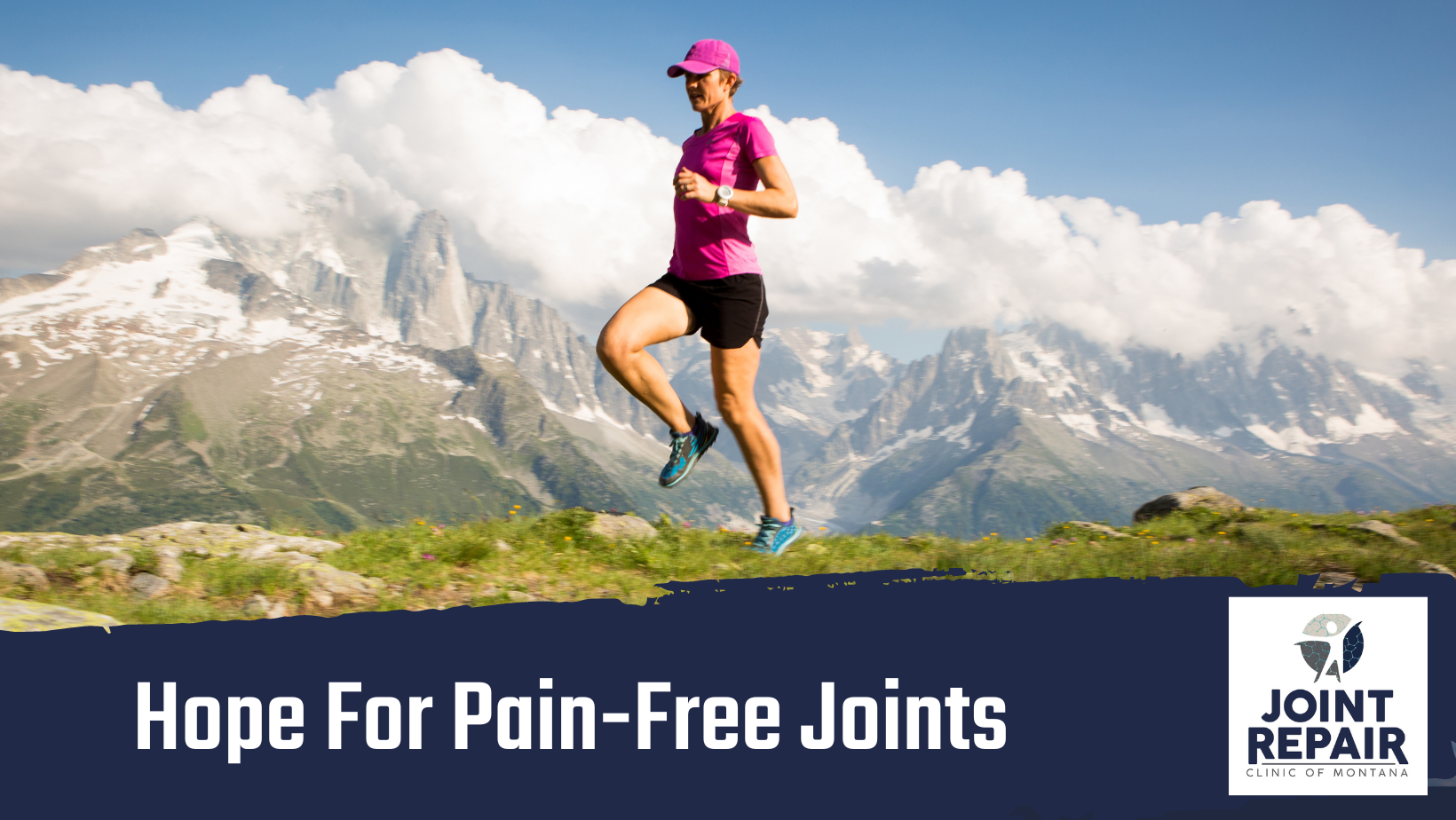 At Joint Repair Clinic of Montana, we put cushioning in joints to help people get rid of their pain and suffering, and improve their quality of life. Our hope is for pain-free joints.

We have had people come to us with joint pain, and after we have analyzed them, we find their joints are not functioning right. They’ve requested we put human umbilical cord tissue in their joints. We have also learned a doctor has previously diagnosed them with meniscus tears, labrum tears, and soft tissue damage.

One of the side effects, and unique blessings, of putting human umbilical cord tissue in people’s joints, that has had soft tissue damage, is that they feel their joints functioning better than ever. We have been able to help many people with different situations by injecting human umbilical cord tissue. This re-cushions their joints, and gives them better range of motion.

Which Joints Can We Re-Cushion?

We have had outstanding success with people’s feet, wrists, and elbows. It’s been such a blessing. Basically, any joint in the body that has cushioning where the cushioning has degenerated, or the joints don’t function right, or they lose range of motion in their joints, we’ve had success with putting umbilical cord tissue in their bodies and improving their lives.

What Age Of People Can We Help?

As far as what is too old… One of my favorite stories, I recommend you all take time to watch this YouTube video about Hut Gibson. Hut is the 92-year-old father of actor Mel Gibson’s. He had a bad hip that kept him in a wheelchair and a lot of health problems. Hut went down to Dr. Riordan’s clinic in Panama City, Panama and received umbilical cord tissue in his hip.

In Hut Gibson’s example, his doctor advised against it, and not that he was against it, it was just that he didn’t know about it. After he took some time to research it, he changed his mind and actually said what’s he got to lose. Mel Gibson’s dad at 92 went and had human umbilical cord tissue put in his joints, and because of it, he got out of his wheelchair, he celebrated, I know, his 100th birthday, and he enjoyed life for many years after 92. So there’s no age too old to get better. There’s a great example of what you can do.

One of the common questions we get here at Joint Repair Clinic of Montana is, “Can you help me if the doctors told me I have bone on bone, and that the only thing that I can do is surgery or replacement?” The answer is yes. We have looked at people that received a bone on bone diagnosis, and very often, when I look at their X-rays, there’s clearly still a joint space. It’s not truly bone on bone. It’s just a narrowing of the joint.

From my understanding, once the joint narrows, a lot of doctors feel that’s a valid reason to say bone on bone. We have helped many people that have received a bone on bone diagnosis by putting human umbilical cord tissue in their joints. Along with the PRP, good nutrition, ozone, prolotherapy, PEMF, and chiropractic care, and we’re getting fantastic results.

This is true for people with bone on bone, as well as people that have other joint conditions. Just because you get diagnosed as bone on bone, does not mean surgery is the only one option for you. Joint replacement is not your only option. For the patients that have gone down our road, they’re thrilled that they did something different.

A Testimony Of Healing

One testimony that I’d like to share with you was one of our patients named Gene. Gene came into us using a walker, and had already had a back surgery. He told us on a scale of one to ten, a ten would be living an awesome life with pain-free joints, and a zero was dead. He ranked his overall health or the situation with his joints at a one. This is a guy that loved to go to NASCAR races. He loved to go spend time with his grandkids. He had given up his season tickets for NASCAR and had given up on the thought of traveling anymore to visit his grandkids. Gene was very discouraged.

One reason Gene was so discouraged is the doctors that did his back surgery said they would recommend doing a second back surgery, but because his health was so compromised, they were concerned he wouldn’t live through it. He came to us just asking if we thought there was any hope. Could we do anything to help him out?

I explained to him about all the procedures we do in our office, and he said he wanted to give this a try. It was so wonderful to see the smile on his face when he returned months later without his walker. When I asked him the question, how would you rank your health now, a ten being awesome, a zero being dead, he said, I would rank it at an eight. Gene would recommend this treatment to anybody that’s looking for help in attaining pain-free joints.

It is so cool to see people that have been told there’s no hope for pain-free joints, that nothing more can be done, or you have bone on bone, or the only option is surgery. That isn’t always the case, and if you’re willing to research this and give this a chance, I think you’ll find that many people are very happy with the decision.

Really, that’s what this is all about. It is so fun to hear from people that used to regret going downstairs, or walking down hills, or not being able to hike, or not being able to hunt or fish in the beautiful State of Montana, or ski or golf. Now, people are getting their lives back and something that they love doing that they thought they’d have to give up forever because their joints were hurting so much.

We see when we put umbilical cord tissue in their joints, re-cushioning the joints, and improve their viscosity, we increase the range of motion. We get to see lots of smiles, and we want to see that smile on your face.

Is This For You?

We have a team that’s here to make sure we give you the resources so you can make the best decision for you. But we just ask you to take some time and research this stuff, take the knowledge and apply it, and if you use knowledge, I’m confident you’ll make the right decision for you. 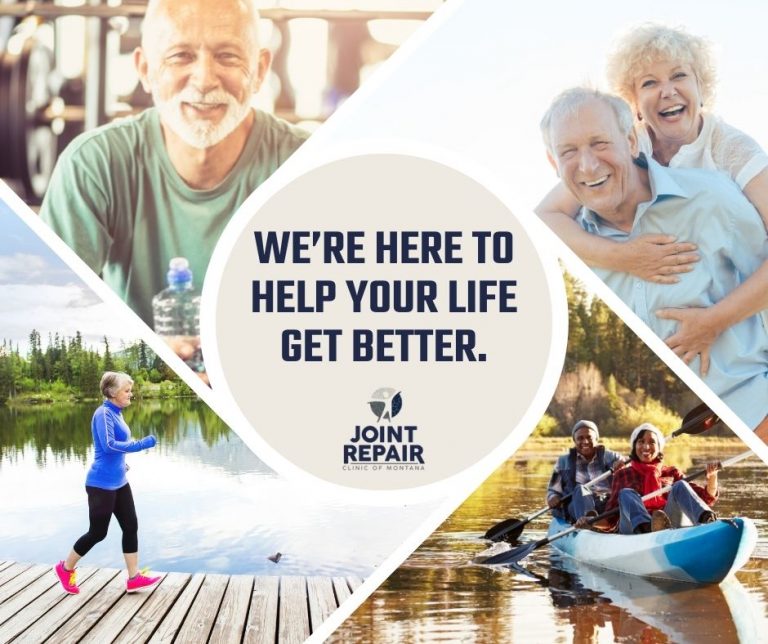